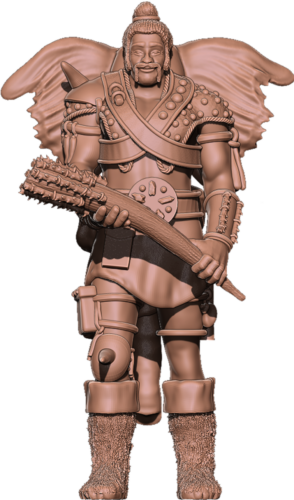 “Though calm as the roots of the World, it takes but a single wrongdoing against Flora or Fauna to awaken his wrath.”

I have always found Kalmo interesting, especially his origin is of great interest to me. I have found out that in the spring of 1163, when they arrived at Lohill in southern Uhmzel. His father, an old Blacksmith claimed Kalmo was three year old boy born in Grebi. Some travelers doubted this though, the child was far too pale to come from ‘up there’ and the Blacksmith also far too lacking the tan. But they was told it was due his mothers origin, Kalmo being of mixed parents.

Anyways none came looking for a missing child and Laust Vorrinson was a skilled Backsmith, kind to the hearth abd treating his son with utmost love. The citizens thought nothing of it for some years but then they noticed the child outgrowing anyone and anything. Questions and gossip began to grow, what was his mother exactly? Without a reply they one day left the town, but I think I now know the truth.

In 1165 Port Tander in Grebi lost their  Blacksmith due an accident and replacement was sought. So, in the autumn of 1165 Laust took the job. He was skilled and the Apprentices of the former one became glad of their new master. Always busy with work, he allowed Kalmo to do whatever the kid liked -playing with animals, wander in the nearby nature and study mechanization.

In the spring of 1168 Laust was approached by a Kobold Smidhr and was offered to visit Mt. Vula. Kalmos bloodline and growing skills was his ticket alongside Laust and the Kobold. So they left only a week prior Murf'ar visiting the town. Hes stay became short as some men mocked his looks. He reminded them of that Kobold visitor and the Blacksmiths lad, thank god them be gone. The annoying comments ensured a cleaned up inn and a pile of bent bones that day.

Returning 3 years later, in the autumn of 1171, most people had forgotten the visiting brawler busting a few heads and instead talked about the exiting Kinoblin goods. Tge now famous Lionel had brought previously unseen luxury to East Fjella and quickly the lesser nobility and middle class was asking for Blacksmith work similar to the foreign designs. His time at Mt. Vula coming in handy Laust buried himself in work and coinage trickled in.

Kalmo on the other hand had a natural grip on livestock, pets and the occasional wildlife breaking the perimeter of nature and town. And as he also became quite adapt in recognizing Herbs for healing, as well as becoming valued help to his father, due his interest in mechanization. As he kept growing and became stronger by the month, he as a 9 year old was able to hold, lift, and even bend things others could not.

Time passed and in the spring of 1182, at his 20th birthday, his father told him that he was indeed not his father. He had merely been the only one there when his mother, a very young confused human girl of the wild, gave birth to him. And when she left them, he traveled south to be able to raise the child, without questions about the child as people there knew he had lived alone. And that he suspected his father was of Kobold, T'Aurs or Ogryl blood.

Kalmo wanted to pursue his origins so he thanked his foster father for good care and a good upbringing. Then left to Midgard to see if he could trace his origins and it was on-board a ship he met Aragon the first time. Both towering above the rest, Kalmo even a head higher. Looking like Berserker and Beastmaster does best, they quickly eyed each other and began to talk. Kalmo is said to have traveled along and met Black Oak at Ye Olde Zaphirs. But he didn’t stay there more than a couple of days as he wanted to visit Lohill in Uhmzel.

He never told us about the visit in Lohill, but we know that in 1185 he was seen trotting paths and streets of cities, towns and villages in Thang. But none he asked remembered a young wild girl, nor a Blacksmith and a infant child traveling south. So in 1186 he again stood in Port Tander in Grebi. Only to discover his foster father had left for Midgard.

Just as he set foot on the shore of Gaslug he was hailed by his friend Aragon at the docks and derailed with him to see the wonderful island upon which Academy of Ea laid.

Such was the pleasure in his stay there, that he lingered on when Aragon left again, and it was not until he traveled to Ye Olde Zaphirs, to attend the funeral of his friends family. That he again had Midgard soil under his boot.

After the sad ritual he tried to find his foster father. The track went from East Fjella to Midgard and back to East Fjella. In a hamlet called Kalmor, the track ended with info about the burial place of ‘a Blacksmith’ from the north. The old man buried there was most likely the one he was looking for, as he in the last days of dying confusion had talked about ‘The towering father and son’. Some even remembered a even taller, older man looking for the old man as well, and if he was the son, that surely gave meaning.

Kalmo stayed there for a couple of days, until he met a returning trader. Who confirmed that the old man indeed had called himself Laust of Mt. Vula from time to time over a beer or two. Certain the trail thus was dead, he thought of other things he had to do. So, he left for Humur the capital of Tusla. To study its mechanization lore. Arriving there he was impressed by the architecture and sheer heights of their buildings, carved directly out of the rocks or elaborated stoned piled to insane heights. And with more than ten thousand of citizens it it was an impressive place. Quickly he found a inn and went to Linvat Library, one of the oldest and finest libraries in the known world.

One day in Linvat Library, walking towards his seat with a handful of scrolls, his arm was loosely grabbed by a person who just walked by him and turbed in the passing. When he turned to face the equally tall, but far slimmer person. A short stare into his eyes, was followed by the words. “Excuse me, I apologize, I thought you for someone else. But I see you’re wholly not”. Then the person bowed and disappeared between the shelves before the stunned Kalmo could ask any questions. But he was certain, that the person knew him, or his Fylgia, or? Then he tried to find the person, but he was gone.

Maybe it was part of his father or his mothers Aura Colour the stranger recognized. I suspect it to be either an Ljost Alfar or a God meeting Kalmo there.

In 1188 Kalmo returned to Grebi, the land he had come to like the most. This time he went not to Port Tander but inwards and uphill until he was at the foothills of Mt. Depol. There he found a huge kettle pot that suited his idea, named it Djelland and began clearing, digging and construction a camp that in time would be the place of The Beastmaster Fair.

He spent most of his time there transforming it from wilderness to a place where other Beastmasters would come and share knowledge. And they made arenas, climbing spots, raceways, stables, barns, sheds, and resting huts -as well as The Furry Hood, a large tavern renewed for its honey-ale and strong mjotur.

In 1190 it had grown to a dozen Beastmaters and in the spring of 1200 more than 500 attended the fair. In 1210 more than 1000 called Djelland their home. Recalling these where Beastmasters themseves the amount of beasts, animals, pets, totems, and not to mention Fylgia was quite a sight. First time I saw it was at their 25th anniversary in 1213 and I was taken aback but the amount of them and the sounds. Deafening to any Bards  and Skjalds.

The next 10 years Kalmo oversaw his growing project and traveled the isles to spread knowledge about it. Then he received word that his old friend Aragon needed his assistance with Spirit and Fylgia at Mukadall Monastery in Braburg up at Markeoy island.

Intrigued he packed, told his fellow Beastmaster elders about his abrupt leave, and then headed for Port Tander. It was at this trip his Beastmaster agenda was altered and what eventually made him resign as leader of his own creation. He kept attending the fairs every year though only as honary guest and not organizer.

Once, at one of the fairs, he saw the tall slim person from the Linvat Library again. As he noticed him being scrutinized, as he did to Kalmo he disappeared in the crowd again and Kalmo knew -someone was studying him. So he approached every Rogue and shadow group he knew or learned about. Even people like Setil, Bergon, Lionel and Nefius was asked what they knew. But none seemingly knew, or cared to share. That kept him more alert than most and maybe also that’s why he is still alive.

Kalmo bexame part of the Holy Star Order and was with the founders when they traveled to the Junnatu Caves in Usai. Seemingly he was brought along to calm or control any beast or wildlife they would encounter. At that trip he survived fighting Attilla, but I would like to state it was an unfair fight..

After that trip he became a public figure of that religious military order and oversaw the build-up of a Beastmaster force counting around 250. At he time of The Great Invasion he was at The Beastmaster Fair, when suddenly Invaders surged forth charging everyone. He killed several Mammutan and wear their leaders head as trophy.

Kalmo was founder of Djelland and The Beastmaster Fair, and is still honary board member of their ruling counsil. He was also leading member of the Holy Star Order, where he oversaw the buildup of one part of their armed forces. He was also affiliated with the High kings Court and is said to have supported The Realm since it first was aired.

Kalmo is exceptionally strong due his origin and is whats to be considered the finest of mixes vetween them three races, Ogryl being the third. He can fame as good as any crazed beast and most Monster alike.