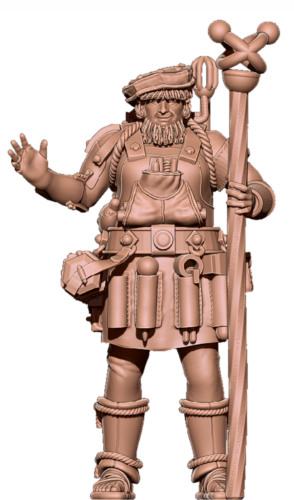 “One of the , if not the most renowned Tatongol Smidhrs ever.”

Zambuk was born in Orkeany, a small town at the marshland tip of the Trifolianda peninsula. With Lake Komla as good as surrounding the town at all sides but the thin strip of marshlands all the way to the Dreko Rough-lands.

The environment had as good as everyone be fishermen, boatmen or dockworkers, and craftsmen or traders of various sorts. Because it had become a natural reloading and trade hub, due the short distance to the eastern shore where the caravans from Ebrar, Kustu and Gaslug saw fit to cut Lake Komla.

Zambuk showed an interest for the crafts at an early age and he mixed childhood with learning several of the craft basics. As he came of age he was apprentice to three different masters, already a Novice by knowledge but of age still to young to wander as Journeyman. Instead he spread his wings further and at 16 he had a handfull of Novice chips on his shoulder.

In 1208 he decided to up his skills and went to Ladii, capital of Ladris. There he stayed for 10 years working with so many residents and traveling craftsmen that he passed all Journeyman tests and became Chief in all 5 branches.

With the spring of 1218 bringing the last recognition of skill, he did an early celebration of his 30th year birthday and left the capital the next day. Traveling up Ladris he passed by his town of birth and greeted his family. A week later he continued eastward across Lake Komla to the mountain town of Cypril laying at the border to Gaslug.

There, he searched for and found Da'Vey, a famed Blacksmith, Alchemist and Mechanization person. Together they invented several things during the summer and in the autumn Herdsman came to Cypril as well. And in the next 2 years they shared knowledge and improved greatly in skills.

In 1221 Zambuk left Cypril and traveled to Tornix and after spending the winter there he went on a 9 year long Journeyman and Chief skill honing travel across all isles.

And in 1230 he came back to Ladii and bought a workshop. In but 5 years he completed all 5 branches of Crafting as Master meanwhile working for customers. In 1235 he was thus ready to work himself into the rank of Lord in all 5 branches, and with the Crafting guild examination papers he bought the houses and workshops next door. Then he took the allowed 5 apprentices in each branch and started to supply the capital with items, tools and wonders.

I’ve heard that during his time trying to become crafter Lord both Amras, Nahita and Tuuna passed by his furnaces.

During this time he also raised through social ranks and gained wealthy and powerful friends, yet he stayed apart from the small war leading up to the founding of The Realm and crowning of the High King. But when The Great Invasion came. He joined the fight against traitor and Invader.

As Ladii was sacked during the war he now travel the paths and ends the life of every enemy he meet.