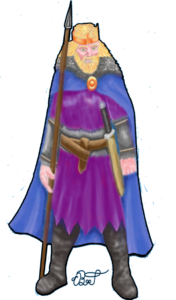 “Such a calm vind, gentle as a lovers touch. But when released he become a tornado of fury.”

Born at the rim of the dense forest separating Etain and Trov, where the Wyrmtoungue inlet is fed by the three mountain rivers. Amras grew up with access to some of the most varied and splendid nature of the realm, giving him a good understanding of how to survive in the wild.

But also, as he was raised in the maelstrom of caravans from Midgard, Naldar, Dalip, West Fjella and the exotic Island of Piecao, he heard many tales and saw many an odd creature and item. Eager to learn more and never afraid of asking, he learned many languages and dialects, teaching him even more about The Realm as strangers chattered carelessly as they passed by.

As his adulthood slowly led him to become a very adapt warrior, backing down from no task or duel, he craved for more risky tasks, so one day packed his stuff and left for Zapri, to join a horde he had heard many stories about. If all these stories really were true, it would be a good place to learn from legends, of that he was sure. Some say he at times mentioned that he crossed paths with the great Warlust, who at that time was travelling in the opposite direction, seeking the dense forests of Gaslug and Ladris.

At the arrival at the gates… of Ye Olde Zaphirs he wasted no time craving in taverns and listening to gossip… Already aware of why he was there,… He wanted to pledge his sword and serve in the Horde… he knocked their strongholds gate with a large thud…

Challenging their mightiest to test him… swiftly passing their tests… he soon became part of the inner circle protecting the King and horde. Such was his service that he followed his liege to Grimsborg when Black Oak became the first High King.

He once told me that he found the test so easy, that he told their elders to raise the bar… and thus as such, was the father of their Outlands test… making them build that crazy Yell'a'Beard a tavern… and that ice-clad tunnel… I wouldn’t last half of it.

As the Counsel of Colours behind the High King and sponsors of the construction of Grimsborg chose to appoint Gizmo of Holy Star Order as commander of the Royal Guard, they chose to honour Amras by making him commander of the Royal Fleet, overseeing both Leidang and strandhogg in The Realm. When Black Oak resigned as High King he asked for permission to step down, which was granted as well as with an offer as warden of Etain, his birthland. Such an honour he could not refuse, and under his governance Etain blossomed and became a safe country for trade caravans and farmers.

When The Great Invasion hit, he was at the beast master fair in Grebi speaking about the dangers of monster hunting and the traumatic life it could bring the hunters. When suddenly, as to illustrate his words, gargantuan elephant-like humanoids stomped out of the forest. With them a myriad of lesser animals strapped with caltorps, spikes, knives, needles, and tiny blades, and from wheeled or carried cages unleashing berserk mammals and odd beasts, going toe to toe with the assembled beast masters and their pets.

With mayhem erupting and hostile invaders, beasts and monsters everywhere, he gave a loud sigh. Dropped his fine cloak and unsheathing his Kobold forged blade ‘The Tune‘ and with a large yell released his fury and with the first swing lopped the arm off one of the massive Mammutan leaders. Loosing the limb it dropped it’s huge arm ring, which Amras has since worn as a crown, to illustrate the pinnacle of his monster killing work. How many he’s slain since, only he knows, but he is still wandering, seeking, confronting, and slaying.

Able to release and calm his Fylgia at will, even when infuriated.