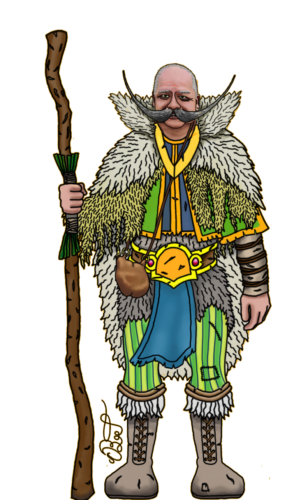 “When the dung hit the mill, he showed what Heroes are made of and became legend.”

Born in Port Anduas at the shores of Andula Lowlands in eastern Thang, as 3rd child and youngest son of a Consul from Efron. There was little to no call of labor for Bené, as is his birth name, so he merely played merchant and worked on whatever project he thought fun or interesting. His favorite was buying old boats, wagons or machinery, which he tided up or outright repaired and sold at a profit.

Not that he needed the cash, as his father worked directly under the Triad Traders. It was merely for the sport of it. All this did though bring him many friends, some outright followers and a few steady customers. And it was this growing ‘flock’ of people he aided, that got him his nick ‘Herdsman’.

As he matured his interest in mechanization brought him all over Mealis, but also to Midgard and other of the smaller islands. It’s said that around 1184 he was seen at the Gleaming Isle, walking around at the piers of The Lair with Setil, Lionel and Bergon. Seemingly discussing layout, and most likely traps, caltrops, and similar nasty surprises for the uninvited.

The one who told me this, thought it fun to see such a young man with those three notabilities, each more than 50 years older than him. But, as he thought, being a lad of a man in the service of the Triad Traders surely must have helped.

After the reported sighting in 1184, Herdsman seemingly did nothing but study and work at whatever he liked. But slowly his skills and reputations grew to such heights. That one day, he was approached by some envoys in a purple sailed ship with a Kraken as banner. The next day he climbed on board and they sailed off. It was not until he appeared at the furnaces of Mino's Owing in 1194 that we learned he had been at Mt. Vula.

Some say that there where a few years, around 1213-14, in which Herdsman was gone. But in 1215 he returned, only to leave for Ye Olde Zaphirs where he studied with Lord Nam for 3 years. After that he left for the town of Cypril where he visited and studied with the young but skilled Zambuk for 2 years.

In 1221 he returned to the Free City of Muldum and was there when the extremely skilled F.F. Jaeger joined Minos crew of skilled Smidhrs.

With hammer so skilled…

And hits so angled…

There was much to learn…

But, alas soon all coped…

Only order and tidiness was to do…

When Mino left and men like Mayor Tri-M decided to form the Bulls Order and break ties with king Nefius of Fur Oracles and one of the founders of the Triad Traders. Herdsman was the obvious choice as 1st Quartermaster of the orders weapon arm and in charge of the towns storage supplies.

A title and job he held with great honors until The great Invasion, where the Free City of Muldum was sacked and burned. It’s said that when The Great Invasion force poured through the gates, he was visiting Thang. Where his eldest brother laid sick, after an assassination attempt that had killed the rest of the family. Herdsman told me, when we met after the Battle of Weeping Plains and the re-coronation of High King Black Oak once more. That he thought the murders unrelated to The Great Invasion and had an suspicion of who was behind. But he would not tell me.