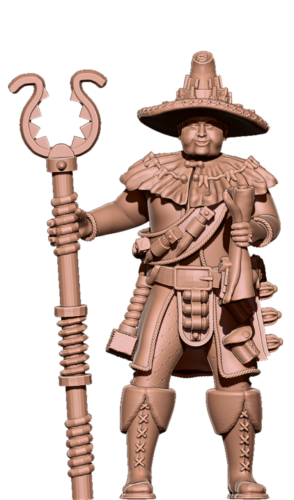 “A mortal able to stand face to face with Vampires are as rare an living Magic Shard. Da’Vey is one of the few…”

Born 1165 in Ahmdalin, the great trade hub at the western shore of Manhover Creek. By an Ambassador couple from Skium.

Da’Vey spent his youth playing with the other state-staff, Nobility and some Clovincaz offspring. Thus, he grew up in a pond of knowledge and ecen had access to the Academy of Ri. A place he favoured and could spend countless hours studying in, especially up to when his parents where to have visitors from other Races, Countries or those who had been at Mt. Vula. To be able to spice up conversations and have batives elaborate of the librarys dry texts.

In time he became quite wise and noticed how some cultures advanced ahead of others, discounting the few individuals capable as Mana Manipulator. So his interests slowly turned from childish play to serious studying and determined developer of  Mechanization

In 1180, at the age of 15, he Apprenticed to the local Engineer Guild. Creating odd stuff and combinations of what he previously had examined. Such was his talent in analyzing, decomposing and wit, that he in but 3 years, surpassed all other students and pushed his limits. With scoped up projects came broadening of skills, so he began delving into Alchemy.

At his 18 birthday, both Mumra, Natiha, Nertilu and other lesser Gods came by to meet and gret this mortal talent. It’s said that he pondered the godly visit for almost a year, then decided they came as part of their scheming. So he worked hard to strengthen his bonds with Gulmur, the greater God of justice and made good bonds. But oddly enough, due his work with Essence and strong will, he developd into a Mentalism unique with Channelling running strong in him.

As he grew in skills, physical and Magical, the interest in him from Allele Diploid was arisen. So, the night right after his 30th years birthday, 1195 became a milestone in his life.

What was first believed an assassin, seemingly thinking him safe asleep, tried to murder him. Feeling the presence Da’Vey opened his eyes, grabbed the person by the throat and a fierce melee broke out. The assassin a better trained hand-to-hand fighter, but Da’Vey far stronger so within a few minutes he had the upper hand and managed to get the foe pinned. This made the assassin turn into a blackened blur, begining to float out and fill the room it blurred Da’Veys vision and choked him severely. Then the assassins arm materialized and poked him hard in the throat, thus escaping the firm grip and with a snarl it drifted out the window in mist form. Furious Da’Vey gained his senses and yelled in anger.

As the situation relaxed and he went to wash himself, he noticed two small needle wounds at his throat. As he was sure it was not from the melee poke and no poisonous effect seemed to build he wondered what it might mean. So he began to study it and soon realized it had been a Vampire.

This was of course no assassin nor do I believe it a Vampire. From the description I believe it to have been the ’11th’, an agent of the Twelve Fangs, trying to test ‘bite’ him and I wonder who they have as match -if any yet. Da’Vey began studying Vampires and turned his Crafting towards countering their magic, tricks and inert power. He spent the next 15 years traveling, and learning about them.

In 1196 he for a while traveled with Wilson, Atallanti and Krokus. Atallanti left the gang that same year and Krokus did so in 1197 but  Wilson” and Da’Vey went to a Teleport Site being excavated by Longhorn. Finding it rather uninteresting Da’Vey left to pursue his prey -and only later heard about the great Mammutan slaying carried out by Coposim.

What he did from 1197 until 1217 when he settled in the town of Cypril at the border between Gaslug and Ladris is unclear. But he claims that he in those 20 years both managed to kill a dozen real Vampires, spend 4 years at Mt. Vula” and 4 years at Darin. Travel beyond The Rim and visit Outlands. He is to our knowledge, the first mortal to have been at all those four places. And, he learned the truth about Allele Diploid, but kept up his Vampire hunting as they are also real.

In 1218 Zambuk came across Lake Komla to the mountain town. There, he searched for and found Da’Vey, as he wanted to share knowledge about blacksmithing, alchemy and mechanization. That year they invented several new things and in the autumn Herdsman came to Cypril as well. And in the next 2 years they shared knowledge and improved greatly in skills.

In 1220 Atallanti came by and he traveled off with him to Remas to meet Woodmaster and share knowledge about Monster and Vampires. He stayed with them until 1226 and as they went for Midgard he went back to Findon.

What he did until The Great Invasion none know but some say he at times hint at another travel below The Rim. But within hours of the Invaders swarming the Academy of Ri he came out of the Astral as well. Sliching, stabbing, cutting, and poking foes left and right.

Since he has stalked foes and slain hundreds.

He is able to recognice a true Vampire abd are as good as immune to their abilities.