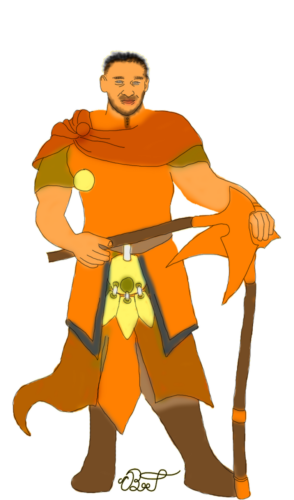 Captain of The Gyron Guard

“Said to have been spawned by the energies of a lignthing.”

Born at a stormy day, the very first of 1200, in the mountain village of Gulbabur at the eastern peak of Einnas Ridge, this large strong boned child is said to have looked at Midwifes and family with eyes reflecting the thunder flashes outside. Then bursting into a great grin and reaching for his grandfather before anyone else.

This exceptionally strong bond grew throughout his childhood, where he spent more time hunting and fishing with his grandfather than fooling with the other kids. This made him an exceptional tracker and skilled sailor of small boats. But when his grandfather died he shunned those areas totally and took up weapon fighting. Some say it was in a hope to one day face the grandfathers bane.

None know how his grandfather died, but its almost certain Zyr ‘O’ Loth saw him being murdered by someone. To this date he has not met the assassin though, as we would all most certainly feel this as his mood most surely would change. A mood resulting in such grim determination, that very few ordinary men care to train combat skills with him. But he has through out his career trained with the best and won numerous tourneys. The last one he fought in as recent as at the great fair this spring. He fought on behalf of the Gyron Lords against Painbringer representing the Oktogon to determine which Organization would gain a seat within the Counsel of Colours. It was one of his rare losses and only on a technicality I’d say.

Long before that, in 1217, he left Gulbabur and traveled down the Wickram River. Reaching Port Mavoll at Pebron Plain he had enlisted in their city guard within a week. Quickly climbing the ranks and in 1225 he became an officer. Fighting and organization skills soon made him climb ranks and in 1232 he became Malvolls Major overseeing the entire city guard.

Retracting more and more into city and state matters, he became a wealthy man. Both due his wits, but also his position, as he figured which foreigner was behind the purchasing of property in their town -as well as throughout rest of Obran. So when fate smiled at him in 1239, or was it someones skilled plotting, he was eyed and offered a court job by king Krove Antu II, who ruled Obran. He saw his luck unfold and moved to the capitol.

There he slowly but steadily investigated the buying up of property, raise of companies and organizations. And he began expanding the secret network of agents he had spawned in Mavoll. All the time playing along with this foreigners agents and always hinting at forming closer ties, he one day in the spring of 1240 he finally met ‘the foreigner’. Eating at an inn, a stranger sat down asking if that table-side was free, recognizing him at once a nod was given and the stranger said, “So you knew it was me, well, I always thought you brighter than most”. Zyr replied, “Who else could it be Nefius“.

Then and there both men agreed to aid each other uniting all of Markeoy, theoretically making Zyr a traitor, but that was not how he saw it -and had Nefius been able able to read thoughts that day. He might have had his dream come true.

Had he but known… nor men or buildings shown…

Gods know… what a show…

During the next 13 years Zyr aided Nefius building his power, mostly though it was his own agents he sliced into the Triad Traders organization. Thus, he built himself up as a power to count, and when king Krove Antu II died far too early in a hunting accident. Zyr was ready to be the child kings puppet master and speak on his behalf at the 2nd Fair of The Realm. But much to his surprise a lesser court noble, So-Ein Begir was named Court Councillor of the child king Imgall Mir I. Bad luck comes in pairs they said, and he was also dismissed from his position, and a really nasty and malicious emissary named Black Pelvis was given his position.

Literally thrown out from court he quickly found a new place to act from, as he accepted a long standing offer to join the Gyron Lords. Its said his first mission was a trip to The Rim and when he returned the next spring,  just in time to join the Fair of The Realm in 1254 as one of theirs. He carried a pair of really odd large jawbone or tooth mace or axes, that he say come from a Dragon which he slayed below The Rim. I recall The Pilgrim and Polski both being quite interested in the weapons.

At the gathering he watched closely who talked with who and how people acted. His own network still intact, access to the Triad Traders and his new base, allowed him to figure who was behind the coup against him in the spring of 1257. At least that is our explanation of why he traveled to Grimsborg just prior to the High King sailing off to meet Nefius. A meeting resulting in Nefius disappearing for 5 years.

Zyr ‘O’ Loth was but one of many who used the vacuum Nefius departure created, but he acted swiftly and with far more force than any other. Almost as his entire network was stringed up for this, so he gained a large part of the cake. No longer interested in the crown of Obran] but still with an eye for all of Markeoy. He aimed his focus on the young Imgall Mir I and the court members that had couped him earlier. So in 1262 when Nefius was pardoned and approached him again, he turned down the offer.

He spent the years up to The Great Invasion securing his position in Obran, Markeoy and within the Gyron Lords. And when it hit he had managed to become a noble man of King Imgall Mir I and counted among the royal advisors, preparing to outmaneuver them all and end the drooling lads reign.

At some point I had the luck to stay for a week at his household, finally hearing the story behind the Dragon Axes. Hearing about his previous fall from power making him act as he did in the unplanned encounter, makes sense. A man who just lost everything, facing terror unimaginable and charges his opponent instead of accepting death, is the very essence of what makes him the Hero he is.

However, when The Great Invasion knocked down their great halls gates and invading Pigryn and Anurai was killed in dozens by his Dragon Jaws, they where overwhelmed. So, he grabbed the young king and fled the overwhelming force, so that Imgall Mir I could ride right beside the High King in the Cleansing Crusade -his most trusted Zyr, now a self made prince-brother, at the other!

Newer the less… he was not ‘ye bess’…

None the less… he was surely to bless…

With honor act… he realized a fact…

Can move way faster than most other Human and is exceptional in duels.