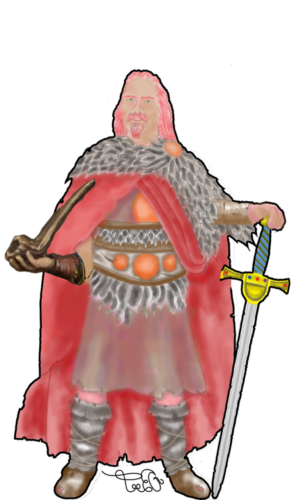 “We know of no other more dare-develling Human alive, than Wilson ‘The Mouth’.”

In 1135 the town of Mostul in the Rinti Marshlands heard the first cries of a newborn Rimzir. The parents, a Rimzir Eel fisher fisher and his Jomzaar Woodcarver wife, was glad their firstborn survived the hard labor.

They spent as much time they could educating the lad, teaching him not only their crafts but also had him visit family and neighbors to study their crafts. And the kid loved it, learning was a game to him and he chewed himself through childhood having fun meanwhile becoming quite skilled at several crafts.

Then, in 1145 disaster struck the family, as his father was attacked by something in the water while stalking eels. He lost his left leg in that attack and it scared the town senseless. the elders gathered and after a brief discussion it was decided to see if any Monster Hunters was willing to come to their aid. The only one they could find, was a caravan guide from Uhmzel called Murf'ar. Wilson told me he’d never forget that day, when a man more than 2 meters tall and muscular like an ox walked into their town and with a gentle voice presented himself as Murf’ar, there to find the hungry eel. 2 weeks later he was gone and the Monster hang toothless and dead at the village center.

That, was when Wilson decided he wanted to slay Monsters as well.

He spent the next 25 years training weapons, acrobatics, climbing, swimming and hard physical labor to earn money for the family. He began taking on nuisance wildlife, then beasts and eventually what others would characterize as Monsters. He also at times, when emissaries from either Ebrar or Mumak came to collect taxes and demand loyalty by force, gently escorted them off, or into the cold dark waters of the marshes. Because the Rimzir paid homage or bent the knee to none, especially not under threat of punishment.

In 1170 he heard about a rather large number of travelers dissapearing down south-west in Scia around a place called the Widow Caves. As there was no rumors about robbers or thief’s spending spoils, his gut feeling told him there was a task to complete and loot to be claimed.

Arriving there he tracked for a couple of weeks, getting to know the caravan routes, traveler paths and herders preferred places. He began to climb into pot holes, crevasses and the deep-water chalk pits. And it was deep down such one, he spotted the glimpses of scales, and reflections of long fangs and claws… when the water surface broke at his left. A young lads head stared right at him and he quickly gestured a shush, meanwhile turning his head and turning the finger to point at the Monster. Who was staring directly at the young lad, and with a snarl it back-flipped out into the water -to feast in fresh blood.

Wilson told me that he’d actually never seen a Human swim that fast, and just as the Monster was to chew off the lads feet, their hands clasped and he yanked harder than he’d done in years. Flinging the lad up behind him, he used the momentum to half-spin and spear his two-handers blade right into the face of what was a Marshlip. Surprisingly it had not seen Wilson when it dived and as such had all focus on the kid. So, it ended being an easy kill.

Wilson and the lad searched the cave and found quite a pile of loot and they went to the lads home town. There Wilson praised the kids aid and skills, that the nick-name The'D Fish was given with respect and joy.

Wilson took The’D Fish as apprentice and they went on The Hunt for 5 years. After which, on the same date in 1175, Wilson came back to the town of Munders at Lake Ancorr, said the apprenticeship was completed and left with but a brief farewell.

We assume Wilson went from Munders to the hamlet of Imvas at the east side of Mumra's Stomp, a huge Kettle Hole in Butan who had problems with a Monster, turning out to be a rather large Mountain Troll. It had killed all the local Monster Hunters but Nahita. Wilson agreed to aid the town and they tracked it down and killed it in the autumn of 1175.

Satisfied with revenge Nahita needed a rest and Wilson was surprised about the amount of loot it had. A large pile of recent and centuries old items filled his backpack, pockets and the odd little wagon he could unfold. They decided to spend the winter in Khemlet, a town down the Gullmann Roughlands at the end of Pirkely Plateau.

The swarming hub of people, with several caravans settling in for the winter gave them the opportunity to get exceptional prices for their loot. As well as several offers to come investigate areas and slay foul things. One of these tasks sounded more brutal to handle than the rest and in the spring of 1176, they traveled to Lake Progmorr in Quigly at the island of Utari. At least one Monster, maybe more roamed the shores killing livestock and travelers alike. Task sounded like they better team up and they went there and. Turned out it was both a Necromancer at work and a pack of Werewolves. During summer they killed the lot and tracked the nobleman down.  Stopping him from ever again summoning anything.

I’ve heard they in 1176 was at the docks in Gir Dansk trying to figure out what some of Bergons Borgians was up to. When the Kinoblin anchored up and rowed to the pier. Suddenly the Borgians was without doubt drawing crossbows and blades to ambush the foreigners and the guard on duty at the harbour, and they attacked the ambushing lot. As they fought the four they noticed how the young guard, Polski in a swift blur of motions killed four other assassins. Uncertain if the Borgians intended targets was the Kinoblin, Polski or the assassins attacking guard and visitors, they decided to keep information about their fight to themselves and disposed of the remains. Afterwards they approached and spent quite some time with Polski at The Buckling Wyrm inn.

Snarling fray… exchanged for bloody spray… at Wilsons to stay…

Then… smiles and shakes of a newfound friend…

The years 1186-88 Wilson spent in Ranzamill, talking with Atallanti and his father M'rizakiri about Fylgia. In the spring of 1189 Wilson and Atallanti decided to start protecting the coast as far too many refugees came inland due raids from Naldar. They spent the next 3 years throwing those raiders back into the sea or onto the dung heaps. Those remembering being saved say the pair made a sport out of being the one with most kills. Wilson did more than 160 of these.

Eventually, as the raids never seemed to stop, they approached the royal court of Fridor stating that stopping this was a matter better suited for the country’s military and they should up defenses. That being said, they went back to hunting Monsters

In 1192 they heard about a nature worshiping cult up at Utari, being attacked by what turned out to be a Wickeryadi. Killling everyone of the Altwalders but the small lad Knut Levo, as they seemingly came too annoy it at it’s Earthnodes lair. To this day it’s rotting remains stands at the very center of said Earthnode.

Their travels brought them to Ye Olde Zaphirs in the spring of 1193. There they met Krokus who left his studies with Kanziganthir and went off with them. Atallanti parted the group in 1196 and in the spring 1197 Krokus parted as well.

As he was interested in Teleport Site, Wilson in 1197 went to an excavation sponsored by Longhorn. Where he met the legendary Huginn and Coposim, who saved the lot by easily killing a frenzied Mammutan appearing from the Astral.

Approximately 10 years passed before we again have records of Wilson’s deeds. But in 1218 he visits Nahita at the Oaina Temple. Staying there due winter he met Sessy and Polski in 1219. The year where they hunted and killed the Blue Marshlip of Jabos.

The year after, in 1220, loaded with loot from the Monster’s lair, Atallanti, Nahita and Wilson traveled to Osmes to visit Testiculas who’s reputation had reached their ears.  Its said they bought most of what he had ever cooked, dried, steamed, hacked and mixed.

It’s unclear why Nahita, Sessy and Wilson went to The Rim in 1221 where they met Themac. Their goal seemingly common, they spent 2 years searching for either a Monster or passage. But in 1223, 2 years later, all but Sessy left.

In 1235 he met Atallanti again at the Allumnata Towers and in 1240 Nahita was there as well. The Gyron Lords have told us they left the same evening as Nahita arrived.

But from that event, up until The Great Invasion Wilson didn’t linger at any known place but for a few days, as he lived The Hunt to it’s full. Some say he got several of the Invasion Races under his belt during the decades prior The Realm’s collapse. So, when they swarmed he was prepared and knew their soft spots.

He was at the front when the reinstated first High King and The Great Invasion forces clashed at the Battle of Weeping Plains. He reaped through foes with such speed that he ended up deep within enemy lines and cut off from the rest and was believed dead. But die he did not, as I’ve heard several tell of ‘ol Wilson, charge in for the rescue on several occasions, throughout the Isles since that day.

Wilson is no longer tied to any of the Organizations nor Nobility.