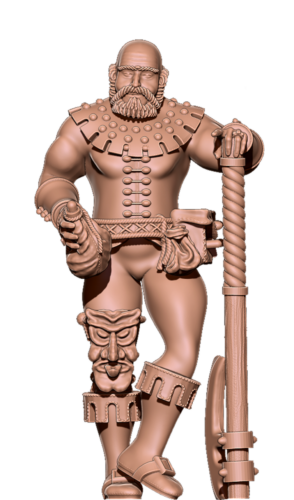 “A skilled Human in a couple of Professions and with T'Aurs blood running strong in his body. Made him a outstanding individual even amongst the Heroes.”

Born 1174  in Oglan as the only son of a miller couple, it was as if he inherited a whole flok of boys energy. Always tumbling, wrestling, climbing and whatever he could imagine using his exceptional strength for. He is stocky but not the fat type, no his are a Carcass built with bones as strong as mountain roots. Quite the opposite his sisters, both small, skinny and delicate for their kind.

I recall seeing him for the first time in 1190, when I travelled with Themac to the Rim. As we walked the piers asking for cabins of travel, the lad came strolling with 3 sacks of grain as if they weighed nothing at all. Quite impressed I asked his name and he grinned a ‘Pakara’ towards me -and then he was off with a nod to my pledge. One of the youngest captains I’ve ever sailed with, he becer ceased surprising me.

Once, he was 9 or 10 I think, he overheard some really shady people, talking about doing harm to a certain king in Midgard he was planning to seek out. So, he stepped up asking them to kindly repeat the words, as he thought it sounded like treason. Instead they drew steel and charged the lad… right into the unleashed fury of an Ogryl. It was not the wisest thing they did there, as it brought them a quick beating and imprisonment for a long travel. To the gates of that king of Midgard, of which they previously had uttered assasination plans.

Reaching the gate, he explaied why a lad had 3 prisoners at the wagon, to the grinning guards. Who took the moaning cutthroats to the dungeons, meanwhile Pakara was offered food and shelter in return. Within a few days he had made so many friends that he decided to stay at Ye Olde Zaphirs and in but a few months he had built a watermill. Baking all day long unless leidang or strandhogg had need of a strong set of arms.

In time this merry mountain became so skilled in warfare that he was given their mantle as Stallari. A title he filled to his fullest, and he brought many a spoils home and ruined many attacks on his Horde. Several wars saw him in the front, but at some point in time, its unclear to me exactly when but in the time between the coronation of Black Oak and retirement as High King. Pakara left the Horde and his title as Stallari and simply wandered off like the day he arrived -with but a single wagoon. If it was to seek the comrades who had joined Berserk Masters, join Kanziganthir in the ancient quest, or persue something else I do not know.

Two things are known, one is that he established a Bakers Guild ending up spanning all The Realm. With some exceptional recipes being deceloped and kept within the guild. And its said that Pakara years later, was seen shoulder to shoulder with some of his former comrades under the banner of the Berserk Maimers. Its hard to tell because so few withnessed their charges and lived to tell about them. But that was many years prior The Great Invasion and what he did up till that is uncertain.

But at the Battle of Weeping Plains, he surged into the enemy rear with allies, spreading death and defeat to the foes of The Realm. He then participated in the Cleansing Crusade up until Black Oak stepped down as High King once more. They have in recent months both been met at the dusty roads, one or more of Black Oaks inns or alone persuing some foe, traitor, or task.

He is exceptionally strong and with stamina beyond belief and can go Frenzy and Berserk at will.