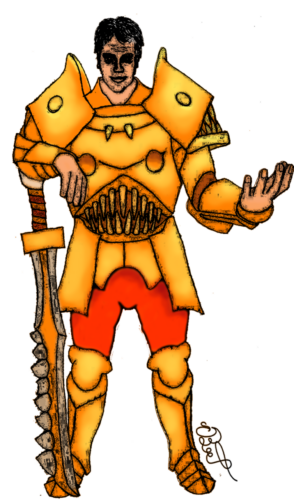 “Imagine a life like that, from mighty Prince to dungheap corpse, and then centuries as Arisen puppet of his little brother. The awakening would have shattered lesser minds.”

”As I spun around, his mace missed my body by a hair’s width, and like a dance, his shadow appeared to spin with me. Shifting the weight of “Spiritmaw”, my trusty sword, to my left hand, I aimed for his shield. Intending to shatter it with such force that it would send the annoying turtle sprawling to the ground… But my god, I never expected the skill that he still possessed.

As I splintered his shield, his mace hit my helm, shattering it to a thousand pieces. My mind fractured and while I thought my Spirit would leave my body once again, I felt a darkness disappear within me – one that has clouded me for centuries. Shield gone, my enemy still stood tall as the force of my blow merely had sent him a couple steps back; regaining his balance, he prepared to move in for the kill – to crush my shadow oozing skull…

Painbringer told me this is how he was awoken from his century long slumber. The event where he finally managed to gain the upper hand over the curse that had bound him as an immortal revenge puppet. He remembered every duel he ever fought and every agonizing rebirth, including his horrible first resurrection. As his moldering carcass was discovered by a conjurer, who well aware of the corpse’s strong Spirit and exceptional weapon skills, raised the dead body to do his bidding!

The first time I saw this towering mountain of muscle and weapon skills with my own eyes was at the great fair this spring. Known as the champion of the Oktogon at the time, he fought an honour duel with Zyr 'O' Loth from Gyron Lords. The duel was to first blood and was to determine which of the two groups, should be allowed a seat within the Counsel of Colours. It was an exceptional duel, pitting skilled maturity against lightning speed. Stealing every onlooker’s breath in the almost rebuilt High Kings arena. Lasting longer than most duels and brimmed with spectacular moves, the match had the audience roaring – and then at one point, a mighty exchange of brute force silenced the crowd.

Both duelists paused, silently and eagerly facing each other again. The crowd was dead silent. The umpires closed in and began to mumble… as the crowd began to slowly chime in… “first blood… first blood… “And indeed, a splinter from the shattered shield had cut the chin of Zyr, as tiny drops of blood began springing forth. So, the umpire had no choice but to call a win for the Oktogon champion…

-To which the crowd responded with deafening roars!

Before the great duel I had a chance to talk with Xic about his clouded past, as we are very interested in his origins. Especially since both Kanziganthir and Zizu have confirmed that he indeed goes back several hundred years – far longer back than Fylgia normally lives. His birth even predates most of the written annals of any library that I know of. But this man had very little to say, as his memories were clouded and as such he could only remember things since his last rebirth. But he remembered two things: that he felt he somehow had faced this opponent before – but also that he vaguely knew the face of the conjurer who had raised and controled him.

I had him describe the conjurer for me and will bring this up at our next meeting. But our talk did reveal a couple of things for me. I believe he’s originally from Darin and I think I know who this conjurer might hace been.

When I way in my first years as Skjald, Kanziganthir told me about a court visit he once attended. Many hundreds of years ago, long before even the fathers of Black Oak, Meanbone and Den Godan were thought of. As the advisor to King Ottar, great grandson of Ye Oldes first King, Starkodder. He attended a detachment of Kings who went to Naldar, in an attempt to cease the raids on Midgard and reprisals back at Naldar. During one of the many meetings, the Naldar suddenly took words said as insults, towards the Naldar empor and the meeting erupted in tumult and shouting. A honour duel was the only way to redeem this and the Midgarders presented Atümiivar, the great grandfather of Bullivar, as their chosen champion.

As the Naldar heard the presentation of the towering Fylgia, they called for “Xic” and down the hallway came sounds of an approaching warrior, clad in full metal plate. A odd thing to experience at the court of the Naldar. When he came in through the door, towering higher than even Kanziganthir, all from Midgard held their breath – as he was clearly a Fylgia as well. Smiling, he stepped up to Atümiivar and whispered something in his ear, and as he stepped back – smile vanishing – Atümiivar cursed behind his teeth in their ancient tongue… and the floor cleaned itself of nobles and emissaries alike.

The duel was one of the fiercest Kanziganthir had ever seen, and the skill, stamina and brutality of those two, was indeed a display of Fylgia lords. The outcome, a mortally wounded Atümiivar standing atop a quickly dying opponent, ensured peace among the Isles.

As the duel ended, all went to another part of the castle and none knew what became of the dead. Treaties concluded, they sailed off and the dying Atümiivar revealed that his opponent had been a well-known prince in one of Darin’s famous Clans. But unluckily enough the second youngest son of 7 brothers. So, he would never be King and thus travelled the Isles, to study warfare. And it was he, who had slain Atümiivars little brother in a duel long ago. After Atümiivars brother had wounded Xic’s youngest brother Nikko 'The Archmage' Lia.

Even though he had so many names throughout time all over the Isles, I’m certain that “Xic”, “the Shadow”,  “the Maw”, “Ghost of Zilbur” and more, all describe the same person as this “Painbringer”. If he indeed is that reanimated Fylgia prince, then is he the rightful heir to the throne of “Mawmen”, since he outlived all his brothers who all died violently by assassins or ambushes? Except for the youngest who was last seen going to Naldar to claim his brother’s corpse. But none know why he too disappeared or how he died those hundreds of years ago. All I know from various libraries, Skjalds, Bards and Scholars is that 3 years after his departure to Naldar. The century long bad luck of deaths, assassinations, ambushes and accidents in their Fylgia house began. For a long time, the elders of Midgard and Darin thought it was the houses of Naldar who were behind this. But I must admit I now have another theory, involving the two young “Mawmen” that I look forward to presenting at our coming Skjald meeting.

Questions, questions, Yell'a'Beard, Valgrif, Sejrik… They all asked so many questions… about my beloved ‘ol Naldar… and that great duel so long ago… so I had to go back and visit sites of old… listening to dancers, smokers and reading sheets of old…

And what I discovered saddened my heart and wet my eye… because such was the wrath of Emperor Karito… that the Champion of might was but thrown on the midden… and not buried proper. Oh what shame uncovered this many years later… so unworthy for a prince of might…

I found words of his recovery though… as his younger brother came to carry home the corpse… and was told by officials, “Go fetch what is left and what you can recover then… He is but a forgotten memory to us – and our pigs…”. And there it all ends… as a great fire a year later destroyed the castle and all historic texts. The few surviving traces left are stories by fleeing villagers and lowborn staff…

Kanziganthir told me that the final words of Xic as he reached for his sword was, “Atümiivar, tell my family of this day, and may honour fall upon yours”. And as they sailed home he discussed this with the dying Atümiivar, promising him that he would be the one to deliver the message, as he also always had longed to visit Darin. But he never revealed anything to me about that trip.

How he ended as Warden of Zilbur is a riddle to me, but then again, few understood the mind of the young High King prior to The Great Invasion. Most of the time, he was merely sitting at his throne for days and then suddenly gone for weeks, meanwhile his officials ran the country. Leaving everyone to wonder whether the High King was plotting some grand schemes or raving mad.

But, when The Great Invasion came and the enemies stormed the gates of Zilikat. Xic went to the gate ramparts, spread his arms, summoning forth shadowy fangs and mists from his body. He called upon Murf – arms still spread out as he dove out and crashed into the advancing mob – launching a loud and deafening thunderclap when he landex. He silently and slowly rose, stared at the now-frozen army and tgen charged – killing unnumbered scores. Seeing their Warden Lord attack, the castle defenders sallied out and efeated the enemies.

As the High Kings army retreated towards Mumak, they were attacked from all flanks by countless divisions. But as all hope vanished from the eyes of the noble born and the hearts of every rank and file, long-lost horns sounded in the woods and from the foothills. And in vast numbers Champions of old, hidden tribes and odd races stormed the flanks and rear of the Invaders. I remember Pilgrim telling me, that he at one point stood shoulder to shoulder with Kanziganthir again -facing Frograi and Mammutan Lords. When suddenly another human champion clad in full plate and with a nasty chiming broadsword dived in and cut the leg of a gargantuan white Mammutan… leaving Kanziganthir motionless for a while, mumbling, “Xic? How can it be…”.

Later on, they had a talk with the man, who seemingly could not recognize Kanziganthir. All he knew was that he been ‘born’ in Usai and was raised an orphan, cared for by his elder brother. So, he couldn’t be this ‘Xic’, much less anyone who was several hundreds of years old – though he possessed an Aura with depth and weight that betrayed his claimed age.