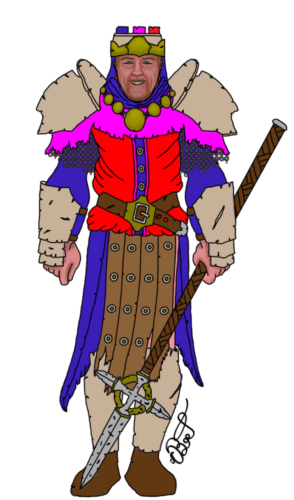 “One of the very few mortals alive, to have faced a God in melee -and survived.”

Born at the northern island of Findon in Dagrinn at the mound of Wilthams Run. He grew up a Tanners lad, youngest of 16 siblings there was not much work to do. So he spent most of his childhood swimming in the Gulf of Ugren or hiking the hills at the feet of Mt. Ugren. As he grew older his travels through the countryside made him see and encounter things, that he outran or wore down toe to toe.

Becoming skilled at defending himself he began venturing along his family’s travels to Andalus, Skelop and Trevan. As well as Goldar in Midgard and the Free City of Muldum in Markeoy. Even though he learned appraisal and bartering, it was more for his towering presence and guard abilities that made him a name for himself. Especially the episode in Free City of Muldum where a T'Aurs got upset that they sold dyed hides and tipped their booth made people notice the youngster. As he simply jumped from out from the mess and grabbed the angry T’Aurs by a horn and yelled, “You’re outta line sir, and have to excuse us but payment is due”. That only made his opponent furious and snorting like a stampeding wild boar it hit him hard. But, unlike normal Human Boneman dident go down. Instead he hit back, and to the surprise of bystanders -he seemingly hit hard. Pummeling fists was his game and soon the panting T’Aurs sat on its knees. Still being in a firm grip it surrendered and flung its purse at Bonemans father. “Take what’s required, and please let go of my horn.” The crowd cheered and soon thereafter Boneman was sent offers of service from several wealthy merchants and nobles.

It was not long before he realized that the really good spoils and benefits, not was in aiding traders but when disputes where to be settled. So, often he took part as a mere guard securing order and other times he was in plate armour up front going face to face with whatever presented itself as the obstacle. Such became his skills that the highest of lords and nobles paid enormous sums to get him on their side. But, he also began to join those he liked for free if he liked the cause or disliked the opponents.

One funny story is that the High King Black Oak once was losing a fight versus a gargantuan spider demon. And as his Mana was running out which would have had a fatal outcome. Boneman comes walking around the bend, sees Black Oak in a rather messy state and clearly outpowered by the monster. Whistling a merry tune, he started to smash the petty crawlers and rag-tag demons clawing alongside their boss. Which, dident notice Boneman untill he stepped inbetween the opponents, and with a “howdy there”. Planted his halberd in its face. The fight tipped from there, and the rather beat up Black Oak only had to cast shielding and heals on Boneman. The joy was great when the fight was over as the deamon carried a very rare recipe in its bags and they hadent seen each other for long.

As years went on his reputation grew and as a new High King was elected slight ripples of anarchy spread to the lesser isles. In Tusla some of the population rebelled and beheaded some nobles loyal to The Realm. But they where quickly fought down, under the cunning leadership of Zizu and his acting general, Boneman. So, the various powers of The Realm wanted to calm things down at West Fjella and keep it from happening again. So they offered Boneman to become Warden of Tusla as it was now a king-less country. He accepted and kept this tilte all up to the day of The Great Invasion.

At the day of The Great Invasion he saw Aquerian fly towards Ea but could do nothing. But, when the Mammutan passed his soil on foot, he could and did do something. Alas, there was too many so eventually the capital, Eramuda, was overrun.