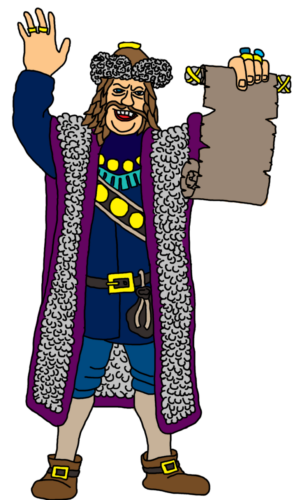 “The most excentric of all excavators in The Realm, who has contributed more than anyone else in mapping and understanding the Teleport Sites.”

Born 1141 at a wagon rolling through the rough lands of Kustu in the spring, he is with 66 cm said to have been the longest male child ever pulled from a Tatongol. His mother a Animist and his father a Herbalist, named him Eau L’dell, meaning Long-One. He grew with the traveling tribe learning everything there is to know about herding. And even though he became quite skilled in the Tatongol ways it was as if the Jomzaar within fought to get the upper hand. When they passed castles, towns, and cities, he longed to experience them, and taste their life.

So in 1160 as they attended a fair in Makdush at the plains bordering Ebrar, he heard that some lesser noble needed a stable master and applied for the position. This was of course not to the likeness of his tribe, but at least his parents wished him good luck in life. And, it should prove to be the first in a long line of successful choices.

One thing that never diminished in him was his urge to make a good deal, or arrange it so that he earned an extra gold coin or two. This led him in contact with not only Nefius, Lionel and Setil, but also with powers trying to strengthen their position in Midgard or weaken opponents trying to get a foothold on their Isles. Thus he became good friends with the Horde Junnatu Weavers, and in 1167 when Meanbone became king, Longhorn joined them and started working on their behalf in Midgard.

During the last 3 years of the 60’s he tended vast herds throught Kustu, Gaslug, and Tusla, impressing everyone with his organization and logistic skills. In 1169 he was finally rewarded for his joining the house of the lesser noble. As the Baron died childless, Longhorn was appointed to continue managing the estate and was made Baron. This gave him direct access to the upper circles of the royal court of Kustu.

Having grown to a power to recon with, he was in 1190 contacted by Nefius telling that new trading partners, the Kinoblin, wanted to buy cattle meat as it had become quite a delicacy in Outlands. In return Longhorn would become partner in the Triad Traders an offer he accepted after being promised one third of all profit. Thus he started to sell gargantuan amount of meat, and to keep the profit high, no report or taxes floated to any but the Triad Traders.

Saved from Mammutan where they all… by Coposim ye small…

In the dusk… cracking tusk… without strain… poked its brain…

After the excavation incident, he decided to fund the Monster Hunters, especially Coposim and he began to show greater interest in the Teleport Sites. But also kept strengthening his own vast network, often disregarding both Triad Traders agenda and plans from Junnatu Weavers. When The Realm was founded and Black Oak crowned as 1st High King, he acted supporting the cause. But mostly where it benefited himself the most.

So, in 1257 when Nefius suddenly vanished, Longhorn acted swiftly to fill the vacuum but it was as if some force was always one strap ahead. And meanwhile he did grab a larger piece of the cake, an unknown opponent got a far larger slice. And when Nefius popped forth again in 1262, he only helped reluctantly.

In the spring of 1277, much to his surprise, his agents told him that Woodmaster was in his town, acting incognito, asking questions regarding fodder, butchery, transport and the like. Knowing the High King was on the track of their dealings with the Kinoblin, he approached Nefius. Who in return of the lacking support since his return, told him that whatever dealings he’d done since 1257, was his own to pay dues for. That was when Longhorn realized, more was aloft than at first thought. So he informed his Kinoblin partners that supplies would halt. It’s still uncertain if it was this action, which launched The Great Invasion, but as it unfolded Longhorn was traveling on ship to Tusla. He still remember seeing more Kinoblin Junks than ever before and he is certain he saw some Aquerian flying towards Academy of Ea.

He landed on the shores of a burning Tusla and headed straight for the Junnatu Caves. In 1278 he reached the Junnatu Caves, and a week later was discussing things with Meanbone. When Aragon and Polski came around with two wagons loaded with magic glass ingots. Hearing that this glass could pacify Aquerian Magic. They gave each Junnatu Weavers a sharp ingot and sent the rest to Mt. Vula.

Then they set out to join the rest of surviving Heroes, Lords and warriors of The Realm, to form what would be known as the Cleansing Crusade

Living by the enourmous wealth he aquired before The Great Invasion and pardoned for any foolish interactions with the Kinoblin, he is no longer part of the Triad Traders or affiliated with the Junnatu Weavers. Instead he has set up a real coprs of excavators and formed a new Academy with excavation as the core agenda. Within a year many Scholars has joined if not fully then as part time or project consultants based on their specific knowledge. in their first great meeting, Longhorn was elected as their Grandmaster.

Can use Teleports from a distance…