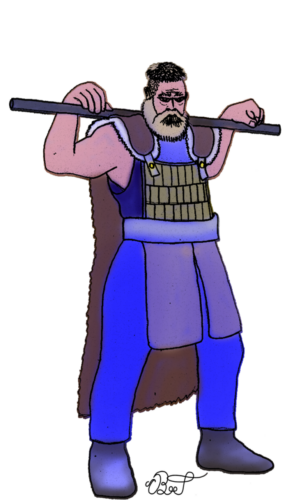 “Very few mortals have reached the construction heights of Lord Nam, and if they did it was a shared spot.”

In 1172 Nam Pieri becomes the firstborn son of an Architecht father and Alchemist mother, in the town of Nivaae. It being the trade gate to Zilbur as well as the main cluster of Gold mines of Staria. There was plenty of things to do and skilled masters to learn and practice from, and he had a back for miners gear and machinery.

At the age of 8 he already had gained knowledge of what made a good tool, and sitting at a town square with some other kids, he explained about ‘good balanced tools’. “That quite some knowledge lad, and the same goes for weapons…”, said a smiling stranger who had listened in. Puzzeled Nam was allowed to hold the strangers axe, and was impressed by the balance of it. And when the stranger cleared some space, and showed the assembled his skills in ‘axe dancing’. The crowd cheered and tossed quite a coin, which the kids collected and gave to the stranger. Who in return gave Nam an amulet resembling an odd tower, and told him, “My name is Baldur Busk of Dartboi Domain, when you come of age and seek adventure and all this coin, then hold this amulet and think of me. Then travel as it guides you.”. Then he rose and left town.

With daily life more filled with the need for better or specialized tools and an urge for clever machinery, Nam’s work focused on invention and mechanization and he became increasingly skilled. Having fewer and fewer that could teach him something and feeling that nothing more could be invented regarding mining. He at the rare quiet moments, would hold the amulet and think of that skilled ‘axe dancer’, always seeing the same landscape and generally feeling an urge to travel south.

Then, one day, in 1207,  Nam finally decided to pay Baldur a visit. It led him south-west to the gates of Grindaa, home of one of the major Hordes called Ye Olde Zaphirs. There he asked for Baldur Busk of Dartboia Domain and was told that Baldur lived in the tower by the shore, easy to spot. He knocked the door and it was opened, by a tall muscular man. The ‘axe dancer’ was heavier than he recalled, but that face, it was easily recognized. “I am Nam Pieri of Nivaae, here to visit and collect my coinage”, then he broke in a broad grin and both men embraced with broad grins. Its said they spent 3 days at the lighthouse drinking and telling stories -several times Baldur is said to have been ‘axe dancing’ inside.

In 1209 Black Oak asked Nam to aid a friend of his, and Nam traveled to Piecao. There he helped Lionel with some mechanization and he also met Jocky Chan, a skilled ‘axe dancer’ and a few other Naldar, one he thought Jockys son and a few other that acted lowborn but was undoubtly used to leading roles. He he crafted an ‘balanced pole-axe’ for  Jocky as they became friends. Nam returned in 1210, and from the mouth of F.F. Jaeger he was quite impressed about Island of Piecao.

Then in the spring of 1215 a man calling himself Herdsman came around, to share knowledge and work alongside Nam. The year went quick and as winter came Herdsman left again with a, “Thanks for the lessons Lord Nam“. Grinning at this as it was overheard by Kanziganthir who remarked, “Yes, why not!” to both mens bewilderment… A week later Nam Pieri was made Jarl of Ye Olde Zaphirs.

In 1220 a young but tall Smidhr by the name F.F. Jaeger arrived at Ye Olde Zaphirs. He had heard rumors about ‘Lord Nam’  and wanted to study with him. In 1223 he left again.

The following years Lord Nam worked as Blacksmith and mechanized the town workplaces. He also created several inventions to improve their defenses and attacking devices. He also dived into the art of weapon construction, trying to create weapons that would aid natural attack and defense moves. Around 1227 he began to rethink fueling Baldurs Lighthouses, and in 1228 they heard from a sailor returning from the Free City of Muldum that F.F. Jaeger had a odd lamp that they might be interested in. As he explained, Baldur smiled ever broader and traveled off the next day.

A month later Baldur returned with F.F. Jaeger and a lamp, and during the summer they discussed and worked tirelessly. Finally in the autumn they had the very first Jaegers Eye installed and lit. It was a great success and they began creating more and installing these throughout Midgard.

It was during their continued work and improving the Jaegers Eye, that suddenly a mist formed beside them and out stepped Relagin, god of Crafters. He told them he was impressed by their skills and wit, and he invited them to come to Mt. Vula. Having heard but rumors of this legendary Crafters heaven, they both agreed and soon was at the magic furnaces and melting pots of any inventors dream. Working side by other famous Crafters like Skrewball, Lär and strange creatures, and at times aiding Gods, they learned quite some things. They returned to Ye Olde Zaphirsin 1235 at the exact same time as Krokus.

In 1248 as the attempt to create The Realm began to spin and install a High King Lord Nam again went to Mt. Vula. Only to return briefly as the Horde split when Warlust left, he soon returned to Mt. Vula.

Not until 1254 when Wolfhowl was crowned as 37th king of Ye Olde Zaphirs did he return to aid reorganize the Horde. After a period he thought the Horde in place and in 1263 he left for a travel throughout The Realm to learn what could be learned.

But during the 70’s he began to feel a shift in how people interacted, and as it grew he finally returned to Ye Olde Zaphirs. Trying to improve their defenses to withstand what he felt could come, he even tried to subtly pry friends, allies, and Gods he knew from Mt. Vula. But no picture of what to come, would form in his mind.

When The Great Invasion hit in 1277, he was at his anvil in Grindaa. Suddenly their alarm along with the sound of melee and curses hit his ears. Grabbing his gear and weapon he ran for the gate, and reaching it he was stunned for a second, hundreds of pig-like humans, frog legged ‘war dancers’ and dozens of gargantuan elephant-like towers of muscle was breaking through the gate. He dived into the fray and slayed numerous foes, but as the fight went on they eventually had to flee. As three of the Mammutan charged him he turned to face them, when a mist formed and to the words, “Not you, not today“, the strong arm of Relagin pulled him to the Astral and to Mt. Vula.

His friends saw him disappear and thought him dead, so when he returned in 1281, with wagons filled with small ‘egg like bombs’ and arrowheads of the magic glass Polski once owned. They had been created with aid of Cronos and other friends from Mt. Vula, and was capable of paralyzing the Aquerian. So, when they began the Cleansing Crusade he rode alongside his comrades and he is still active part of the disbanded Cleansing Oath army.