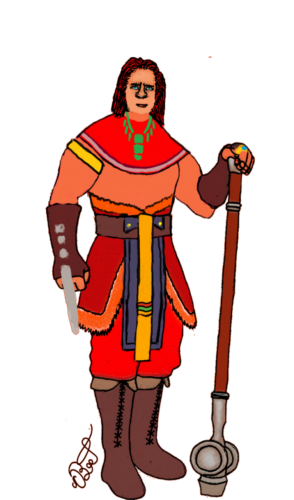 “A mixture of blood… navigator like a god… yet mortal, how odd…”

Born the only child of a Clovincaz father and Ljost Alfar mother Krokus is one of the very few half-breeds of elven blood. His parents fell in love when his father, senior captain of a ship wrecked in a storm, washed ashore at a dense forest coast. Where he was found and nursed by the Ljost Alfar.

When he had recovered he was allowed to stay at their settlement, as he liked being in the rebuilt ruin of an old Clovincaz temple site. Over time they fell in love, and Krokus was born in the town of Ytrill'yar in 1159.

He grew as a Human and when but 13 years old his father died, 76 years old. A huge loss for the kid as he now was the sole Human around. And everything spun so slow due everyones long lifespan. He told me his mother remembered when Ye Olde Zaphirs landed and started to claim land. So, she must be born in F.A., which must be very odd for a kid to grasp. Anyways, it was her stories that eventually made Krokus part with the Ljost Alfar and to the gates of Ye Olde Zaphirs in 1184. He wanted to hear their side of the old stories, and was quite surprised that no one lived among them who remembered those times.

Their eldest was a life-leeching Shaman named Kanziganthir. Born in the year 200 he didn’t know about the landfall or initial fights, like the one at Gonk's Field. But he had known hundreds of their finest through times, and had known several of those in the initial landfall. Many stories, previously untold reached the ears of young Krokus. Beats me why Kanziganthir did this but I assume it was due Krokus being partly Ljost Alfar.

Staying with Ye Olde Zaphirs for several years he met people like Wilson, Coposim, and Nahita who arose his interest in The Hunt. In 1193 he went on a hunt for Monsters across the isles. It was 16 years before he once again stood in Grindaa. A much more matured and skilled fighter, with several odd skins, furs and beads as trophy’s.

Soon to join the ranks… of upper men with no pranks…

Provisions, routes, reefs, currents and actions of every man… more than others cope he can…

Leader of fleet he ended to become… ye, accepting that ‘alfar’ was not dum…

Becoming the Hordes naval officer he was the one who ended up in charge of Amras when that young talent joined up. And as I’ve been told, they where the couple behind the improved Outlands Test inspired by my stories about the Outlands. And what a testing of new tryouts for their Horde it became, A great and well known Hero better known from his rage and killing than using the brain even drowned in that test. Had to hoist the fella up and jump life back into that thick chest of his. He came to mumbling about faces and secrets in the drink!

Anyways, I shouldn’t speak of such things, as the other part of their test is far more interesting. They built a large inn, the Burrito Hall right outside their western gate and gave it to me. He, always more pleased by being served than serving, I ended up handing it to Sjekac as he proved quite capable of more than peeling potatoes.

Oh well, Krokus sure managed a sneaky twist to it all. Axe, torch and all to progress. Shame he got bored and again left for adventures., kinda why I also handed ‘the Hall’ off.

1230 he left to visit Ytrill’yar his town of birth as he heard there was some trouble between his people and some Drakk Alfar. I’m certain it was due an increased interest in the teleport site there, a fact that I think proven by the fact that when Krokus returned to Grindaa in 1235 he knew a lot about the Astral, Teleport Site and Drakk Alfar. He even mentioned that the Ljost Alfar knew how to travel south off The Rim.

Some say, he at one trip brought Themac along. To show the persistent Cartographer what he sought so much. But, this has neither of them confirmed to us.

He spent the next 15 years in the company of Kanziganthir, Lord Nam and several other Smidhrs. And in 1250 when The Realm was born and some people moved to Grimsborg. Krokus left for Mt. Vula. Where he was located when The Great Invasion came.

He didn’t participate in Battle of Weeping Plains but have been relentless in his part of the Cleansing Crusade.

As half Ljostari he seemingly inherited some of their longevity.