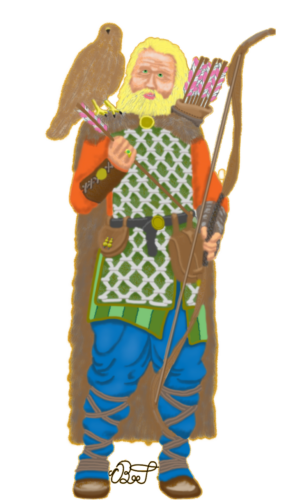 “Outstanding in as good as anything he cared to delve into, a true talent by some whispered to be a God in disguise.”

Not much is known about his childhood in southern Mumak but for him being born 1167 as Mivka in a now lost town called Skaedii. It laid on the plains where the trade routes east to west from Ebrar to Egral and Noriag, and north to south from Uhmzel and Bebram to Kustu. Making it a melting pot of activity, goods, and cultural input.

Hes father was a carpenter and his mother a skinner, so at an early age he gained an interest in valuable resources from the nature. Often he was gathering with elder kids and tracking with young hunters, improving skills rapidly. So, at the age of 12, he was apprenticed to the towns finest carpenter, who he out-skilled in but 5 years. Unable to teach the lad more, the carpenter wrote a letter of recommendation to the Carpenter Guild Master of Mumak. A week later he was assigned as their tenderer of furniture at the Royal Court.

Having learned what could be taught, he also took interest in court maters and often went hunting with the noble-born. His child tracking knowledge and skills regarding skins and furs, impressed quite a lot of high born, squires, and servants. So he became a liked figure in the castle, free to wander as he liked.

One day he was overseeing some rampart structures in a remote part of the castle, he suddenly heard melee noise of steel against steel and loud cursing. Coming around a structure he saw 5 equally dark clad people, seemingly attacking a single high born in coloured clothes. Eyeing him, 2 of the dark ones cursed and charged him -one to drop dead when a thrown measure-stick penetrated his brain through the eye, and the other to receive a broken neck as his lounge was evaded and Mivka passed him. With only 3 foes the attacked one killed 2 of his enemies, while the last died as he turned to flee. This was the first time Mivka met The'D Fish whom he would later be blood bonded to.

Later that evening, discussing the attack over ale and mead at a local inn, The’D Fish shouted at a couple of entering strangers to come and have a mug. Turned out it was Vinotis and Dagthorr. Both only making a stop for the night, as they was on their way to visit Ye Olde Zaphirs. Both had heard some wild stories about how this Horde managed to grow in power and skills, so they wanted to see for themselves. During that evening Mivka became more and more intrigued and decided he would travel along if they wanted company. Hearing about his deed earlier that day, they agreed. The next day he resigned and packed what he would use and gave the rest to the Guild. When we entered Egral, The’D Fish left us for some urgent matter.

Entering Zapri Mivka and Dagthorr said they could feel the soil of the land welcoming them. Later that week when they stood at the gate of Ye Olde Zaphirs and asked for entry, a huge muscular Shaman came forth and told the watchmen to let Mivka, Dagthorr and Vinotis enter. It turned out it was Kanziganthir and within a few weeks Mivka and Dagthorr was accepted as brothers of the Horde.

Over the years Mivka earned the nick ‘Timberwolf’ and came to react to it far more than his birth-name, after all this was the life his spirit liked. He quickly climbed the ranks of the Horde, but without care for a public role, he kept to organizing things. When Warlust, Stallari of Ye Olde Zaphirs since 1250, left the Horde. The mantle of Stallari became vacant, and Timberwolf was offered it and accepted.

Despite all the turmoil caused by the severe splits and Black Oak becoming High King, Timberwolf stayed as one of the Hordes pillars. Securing their palisades and ramparts against attacks, patrolling their borders with Dagthorr and Myth, and planning Leidang against those who broke treaties or plundered their lands.

In 1262, when Kanziganthir stepped down as ceremony master of the High King, Timberwolf held this position for two years, until Sahsnot was giving the mantle. Freeing up Timberwolf so he, appointed as Commander could form and train a core of Royal Rangers. A tile he held until 1268 when it was given to Attilla.

So, when The Great Invasion hit in 1277, he was back in Ye Olde Zaphirs acting as Stallari and a member of their Elders Council. With Black Oak, Kanziganthir, Sahsnot, The Pilgrim, Warlust and many more gone, the recent kings Woodmaster and Sjekac both gone and Wolfhowl elected as 37th king in 1254 He told me he didn’t have boring days, and somehow they sort of anticipated something was to occur, so they where prepared for the worst -or at least they thought so.

The assault was fiercer than anything any of the Hordes had ever seen before. Even the clashes between the 1st Alliance and The Torch when they fought to establish The Realm and install the institution of the High King, was child-play compared to this. They had to flee to the wilderness. But, after reforming, they joined with other surviving forces of The Realm and eventually began a long war to drive off the Invaders.

After becoming victorious 1. June 1281, Timberwolf and Kaosfrog, along with the remaining Heroes swore an oath to search The Realm and destroy any remaining Invaders. It’s unclear how many swore to the Cleansing Oath but its to be counted in hundreds, if not a thousand House Banners. So he is now wandering woodland paths to hunt and kill Invaders and traitors.