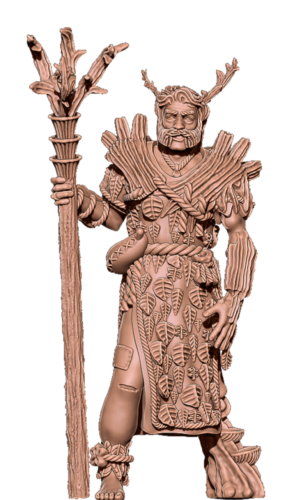 1st Druic of the Silver Sickle.

“The most talented Druid amongst Humans, enhanced in body and Spirit when his initation rite went wrong as a Wickeryadi Spirit merged with his.”

Born 1181, at midday in the southern mountains between Remas and Bilza, the first son of a mother skilled as few other Beastmasters and a father who was their tribes leading Enchanter. He grew up with inherit understanding of nature forces and beast emotions. Soon to develop his own unique talent as an exceptional Druid.

At the age of 10 he became the youngest ever to step into the circle of Altwalders, but in the coming spring disaster struck the Altwalders and their tribe. At a great ritual something went wrong, several where consumed in the initial reality blast, others where torn apart by a emerging Dryad mad by the surging energies. Only Knut managed to escape and tell of the disaster in the nearby town.

It did not take long for the disaster to reach the ears of Atallanti and Wilson. Arriving in the spring of 1292 they started to track the creature and in the summer they slew their first Monster. Shortly thereafter they left again, and the community started to heal. As he was only 11 with both parents gone, Knut went to live with his mothers mother, an old Spiritcaller and her Alchemist husband.

Then one day in 1220, Atallanti and Da'Vey came by. There was something about the Altwalders rite gone wrong back then both men wanted to examine, so they spent some time talking with people. It was not long before they met Knut again, now known as ‘Woodmaster’, talents unfolded he had grown into a skilled young man. For 6 years they stayed in Remas, the trio making short travels throughout Utari.

In 1226 they decided to leave Utari, Da’Vey went to Findon, meanwhile Atallanti and Woodmaster decided to visit Midgard, as Woodmaster would like to meet the legendary Kanziganthir

During their travel through Midgard Atallanti was approached by a stranger with greetings from Den Godan, bearing urgent message which made Atallanti depart.

Soon Woodmaster was at their gates and within but a few years he became a nobleman of the Horde Ye Olde Zaphirs, steady climbing their ranks. So, when Atallanti came by in 1243 to meet Kanziganthir, Black Oak, Woodmaster and the rest of the Horde. Woodmaster was counted one of the highest ranking and it was whispered the he would be the next king of the Horde.

A rumor that was fulfilled when Black Oak became High King in 1250. Not all was happy with him becoming their 43rd King though and some of the true blooded princes and older noblemen openly stated their opinions. Even though he was the most capable of the lot, faction tension kept building and in 1253 Woodmaster announced he would resign to travel the wild lands of The Realm again. Bewildered the Horde elders consulted Black Oak their former king, now acting as High King. He appointed Sjekac as the 44th in the line, until their Horde had elected a new or hopefully, confirmed the choice.

I’ve heard that the debate was fierce, almost crumbling the already trice cracked Horde. But slowly a new name rose among the pretenders to the temporary crown holder, Eru ‘Wolfhowl’ Hojä. And at the 1st Fair of The Realm in 1254, where a new king of Ye Olde Zaphirs was to be crowned, Wolfhowl was the favoured one, and Sjekac was nowhere to be seen.

In the spring of 1277 Woodmaster had an urgent feeling the he should visit Fogwald, guided by dreams, birds and nature paths opening he reached The Deep Inn and was greeted in the door by Deepminded. Inside was Black Oak, Kanziganthir, The Pilgrim and later that day Meanbone. He was quite surprised being ‘called’ to meet this lot, but Kanziganthir explained that it was due his tremendeous talent for mastering beasts and understanding of nature.

They discussed secrets till early morning and continued the next day, until Deepminded interrupted with a “She’s here now” Black Oak, and in stepped El Mary. Looking puzzeled at Deepminded who merely replied, “You should meet these men and take notes lass”. Black Oak grinned at her and said, come now we needed a Skjald for this discussion regarding the stories your fellow Skjald Yell'a'Beard has brought to all our ears.

They once again discussed till late that evening, some seemingly longer than others as Meanbone once told me. El Mary didn’t use her room and he heard female ‘laughter’ from Black Oak’s room. The following day, when the men rode off to pursue the quest, Meanbone turned in the saddle and sure enough, she stood in the doorway looking at the back of Black Oak.

His task to try and verify if the Triad Traders and their associates indeed did support hidden enclaves of Kinoblin and other odd races throughout The Realm. Having a pretty good idea of where to start he went to Kustu to pry around and see if he could find any oddities with the meat herds Longhorn owned. It didn’t take him but a few weeks and he could report back, that not only did they at certain spots slaughter considerably more cattle than they distributed through the open channels. They also transported it rather openly out into the wild, where it was indeed bought by Kinoblin, but also by the Pigryn, Anurai, and Mammutan that Yell’a’Beard had mentioned. So at least 4 non native races was building up inside The Realm.

It was during one of these quests he suddenly felt a large shift in nature, the magic bonds of reality tightened considerably, and as if the earth took a hard sigh. Thus started The Great Invasion and Woodmaster participation in fighting them off. He was seen at the Battle of Weeping Plains but has not been sighted since.

He can travel without rest at a trot for a full week, even through the wildernes