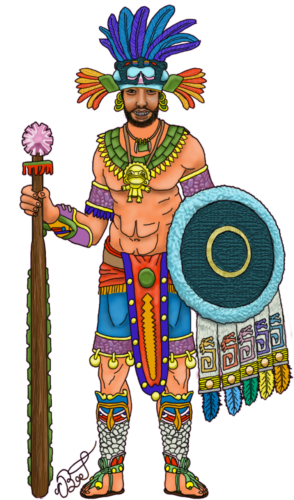 “One of the most legendary of the old school fencers from the Age of Hordes.”

Born in the hot temple city of Olmec Ar at the Feldspar Fields the 2nd eldest son of a general in their kings royal guard and a silversmith mother. Latinoor enjoyed life as a kid, mostly playing at the banks of the Meltano Rill or in the nearby Olval's Quarry renowned for its greenish Feldspar.

As he grew, his interest for his parents works shifted. When young he loved his mothers pattern-work and could stare at it for hours, and he practiced to become a silversmith. But as he began ornamenting armour and weapons for himself and friends, his interest in the art of fighting, especially swordplay, grew.

At the age of 9 he enrolled as a talented youth with the legendary Uck Norry, who was delighted by the lads potential for defense and Cobra like ripostes. When he was True-Named in 1163 it was his fencing master who had the honor, so close had their bond become. But in 1165 mayhem broke out, as a plot against the king was discovered. His father had to arrest his teacher, who unwilling to be so opposed the guardsmen, killed the lesser ranked and wounded his father.

Seeing the steel sink into his fathers chest, the 15 year old youngster exploded in rage. And as he ran towards the fighters he grabbed a stiletto and a rapier. As he closed in on his teacher, he threw himself into a slide at the marble floor -and as hes feet touched his teachers he fended off the slash aimed at his groin. Focus on the lads feet and a possible stomach gut he did not see the flick of hand -but surely felt the thrown stiletto as it sank deep into his left eye. Stunned for a heartbeat he then smiled recognizing at the move and then died.

His father survived long enough to see the king and the new general, place a honorary order on his sons chest. Latinoor had joined the army and gained the rank of lieutenant. The youngest officer in their history, he worked hard and at 25 he had in 10 years managed to become a colonel in the kings personal guard.

With that new title his military duties changed from castle guard duties, protection, arresting and court dinners to administration and education. So he became focused once again at fencing and spent quite some time practicing acrobatics and tumbling. Honing his skills further he became the best in  Trevan. Unbeatable and with very few skilled enough to practice with, he spawned an idea that might help him become better. And he asked his king if he could buy the old abandoned mansion Uck Norry had owned and used for practice sessions, and start a fencing academy. Despite being sad to see him leave the Royal Guard the king understood his urge, and it was granted.

Spending the next 25 years building the Atez Fencers reputation as the finest and most skilled Academy of blade mastery at the island of Findon. Honed his skills greatly, especially as skilled masters from Midgard and the other isles began to visit as well. He in 1200 even had a rather large Kinoblin blade skilled guest testing his skills. It’s said that these practice sessions was quite the sight and some of the few where Latinoor was seen sweating. He came out victorious, but I still suspect foul play by that snouted foe.

Seemingly unbeatable at his halls and arenas he began traveling the isles in 1215 to seek out those with skills at blade. But also enjoyed life as a famous swords-master at every school, castle and court. It’s said that it was during this physical decline that he actually found his mental foundation. As the wine loosened the focus on style and performance he became more and more at one with his own energies. Energies he had not experienced since that day he killed his teacher. But as they came to him, his style became increasingly more fluid. As if he was agile like air, defensive like water, solid as earth and lethal like fire. Some said he was like molten lava when he fought. Facing him, the best one could do was surrender or run.

Pursuing this new style he searched for more fluid, dancing, acrobatic schools of melee and heard of the Aina Wardancers in 1218. Immediately he went to Karoly and there he met Nahita who took him by storm. She was impossible to hit and no matter the attack she evaded. Her war-dancing the most agile he had ever seen, even when she did not use her Channelling powers to buff herself she was untouchable.

Latinoor stayed there for the winter and as they practiced he studied her -patterns. Almost as if it was his mothers silvery work from back then, there was seemingly a core to her moves and from that, merely random selection of a thousand or so patterns. But patterns can be a trap to the keen eyed and in the spring, to her growing frustration he began touching her more and more often. Yet still kept avoiding her lunges, ripostes and whatever she threw at him.

As spring turned to summer they where more often seen talking in the parks than dueling in the arena or training halls of the Oaina Temple. But all their philosophical talk was interrupted when some of Nahitas old friends came to visit.

Grabbling a boar… that was sore… wrestling a bear… without fear…. danger so near…. Sessy laughed…

Its said that Latinoor aided in the slaying of the Blue Mewlip of Jabos in 1219. And that he stayed with Polski in the Free City of Muldum to practice with the T'Aurs named Mino's. After a year there Latinoor couldn’t gain more skills from Mino and traveled to Mumuarki in the Bay of Braburg to visit and if possible, train with the T’Aurs there, as he figured some still true to their warriors way had more to offer.

Its stated by several from the Bulls Order and the Free City of Muldum that they never once saw Latinoor best Polski when they trained.

The same rumors goes regarding The Pilgrim who Latinoor met at a counsel meeting in Tartu. There are indeed a few out there, so utterly skilled and without pattern, that they are untouchable by ‘The Lava Fist” as his friends had begun calling him.

In 1230 he appeared among us humans again, slimmer, stronger and way more fit than ever before. So the 10 years spent at the T’Aurs island of Thezeu had at least given him outstanding physique.  After 15 years, to the surprise of its functioning leaders, he simply trotted in through the main gate of his Atez Fencers academy. Greeting old friends and pupils now masters it was a joyous reunion. But he was soon to be in for a surprise, in the summer of 1231 treachery unfolded at his 80 years birthday. Sitting at the head table, his nephew entered the feast, and in the kings name proclaimed his arrest due being a conspirator towards the king.

Hes reply was not to he kings errand but to his elders counsel, in which he expressed sadness due their greed and foolishness. Then with but a plate and dinner knife he slayed the lot, and atop their dead corpses proclaimed that everyone should flee cause he knew a kings wrath. Then he looked at his nephew, and told him that for his family’s sake, the kid and his guards should make no attempt at arresting him. The accusation was a lie, and he would rather leave Trevan than slay family. But, and he emphasized by gesturing at the dead, “None in this land can capture me. And I urge you, with all the nationalities assembled as students and guests. Let them all leave and soothe thy kings ears, for they are filled with lies -again”.

We all know that everyone was allowed to leave. But later that year Latinoor heard hat his brothers son had been executed due to failing his order. It was a winter with much tumult in Trevan but in the spring a new king was elected and some noble families moved upwards due sudden vacancies.

Despite having killed the malicious king and a dozen of corrupt noble families. The first official act of the new king, was to pardon Latinoor and allow the academy to open again. Latinoor didn’t return though as he knew the way of kings and how grudges had deep roots.

Instead he joined a upcoming Horde as ancient as most but with less wealth and political influence. Within a year he was their Stallari and participated in many a raid against other Hordes to settle scores the old way.

In the war leading up the founding of The Realm and coronation of the High King. Latinoor fought against the 1st Alliance as he opposed leaving the old ways of the Hordes. But their side loosing, he was one of those seen bending their knee both at the Battle of Yernaw Bridge and at the official celebration at Grimsborg

Acknowledging the victors, he stayed loyal to the bending and became a often used instructor for the Grimsborg Guard.  But in 1261 at his 110th birthday he retired from all titles and offices he held. Up until The Great Invasion he merely traveled The Realm. Visiting old friends and refreshing shared memories. A few times we even walked together for weeks or months, benefiting my insight in this great warrior.

Luckily I was walking with him at the shores of Usai when The Great Invasion hit The Realm. I mean I’m skilled and might have survived by means of Magic but now knowing the invaders can counter much of what we do. I’m glad his Kobold and Lava Imp made sabres, the The Twin Tongues was at my side.

Killing the foes we rushed to the Junnatu Caves and from there eventually to the rally called by High King Black Oak. Standing aside so many lords and heroes that fell at the Battle of Weeping Plains was a honour, but also a emotional wound I know we both share.

Now Latinoor as the last goal in his life, roam the paths of Midgard to rid it of Invader and traitor alike.

Can Mana Manipulate without Hand Weaving